(RNS) — They’re not just on friends’ and family members’ Facebook pages or weird corners of the internet.

About half of all Protestant pastors in the United States say they’re hearing conspiracy theories in their churches, according to a study released Tuesday (Jan. 26) by LifeWay Research.

“Yet, half of pastors hear the spread of assumptions about plots often. This is a startling disconnect.” 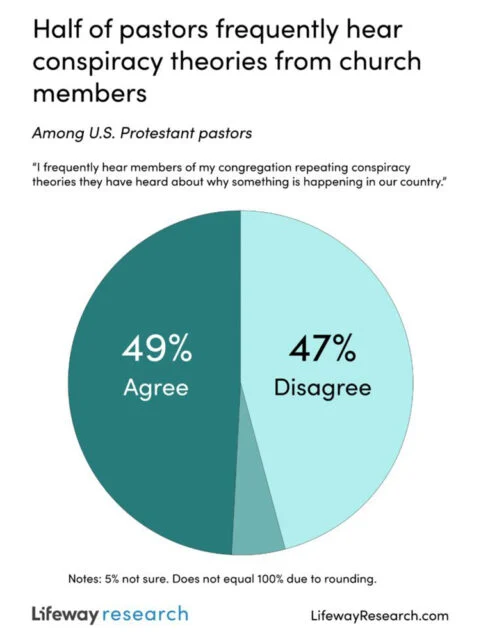 Those least likely to agree were pastors ages 65 or older (35 percent), who also were the most likely to disagree (59 percent).

It also did not define what a conspiracy theory is or question whether pastors themselves believe popular conspiracy theories. For example, some Christian leaders — such as Pastor Greg Locke of Global Vision Bible Church in Tennessee and evangelical Christian author and radio host Eric Metaxas — have continued to share various theories claiming to prove former President Donald Trump won the 2020 election. Those theories — found to be baseless by the courts and by Congress — fuelled a riot at the U.S. Capitol earlier this month.

“At this time, it appears more of the theories are traveling in politically conservative circles which corresponds to the higher percentages in the churches led by white Protestant pastors,” McConnell said.

LifeWay Research, the research arm of the Southern Baptist Convention, surveyed 1,007 U.S. Protestant pastors — either the only pastor or senior pastor of their congregations — between Sept. 2 and Oct. 1, 2020, over the phone and online. The margin of error for its survey does not exceed plus or minus 3.4 percentage points at 95 percent confidence, according to its methodology.